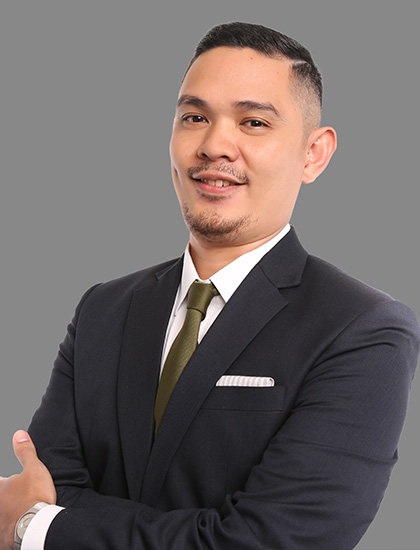 Juris Doctor
University of the Philippines, 2010

Bachelor of Science in Business Administration
University of the Philippines, 2006

Mr. Bauza has almost a decade of litigation experience, having appeared before the trial and appellate courts for controversies on contracts, expropriation, habeas corpus and family law matters.  He has also handled criminal cases where prosecuted and defended parties involved heinous crimes.

Aside from the courts, Mr. Bauza has also defended clients in proceedings before different government agencies and tribunals such as PhilHealth, Department of Justice, Laguna Lake Development Authority, and Department of Trade and Industry.

He is similarly well-versed in alternative modes of dispute resolution, including arbitration. He has handled cases brought before arbitral tribunals in the Construction Industry Arbitration Commission and their appeals. Mr. Bauza assisted in clients in arriving at an amicable settlement of their disputes. His recent settled cases involved:

Mr. Bauza has likewise helped clients in protecting their businesses and investments outside the courtroom. He has provided legal advice to clients during Senate and Congressional hearings to ensure that their cooperation will not result in self-incrimination.

He has assisted property developers, both domestic and foreign, in multi-billion peso deals with the national and local governments. He has also advised clients engaged in food, medical, and retail businesses in complying with statutory requirements under the Government Procurement Reform Act and the National Building Code.

Mr. Bauza was admitted into the Philippine Bar in 2011. He is a member of the Makati City Chapter of the Integrated Bar of the Philippines, where he has been part of the Bench and Bar Committee and the President’s Working Committee.