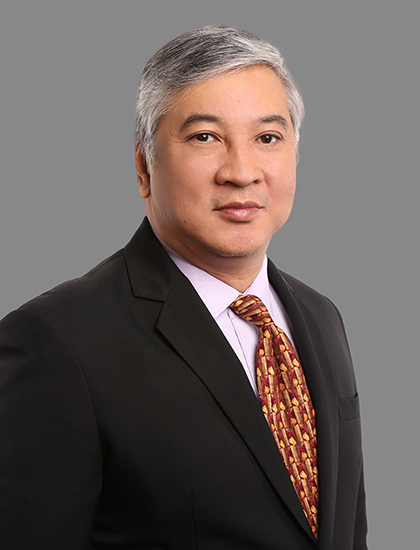 Bachelor of Arts in Philosophy
University of the Philippines, 1985

After obtaining his Masters of Laws, Mr. Villadolid was awarded a fellowship grant by the United States – Asia Environmental Partnership Program (US-AEP) which enabled him to study at the Environmental Law Institute (ELI) in Washington DC. Mr. Villadolid specializes in litigation and arbitration principally in the areas of information, telecommunication and technology. He also handles cases in areas of cybercrime and cyber security, public utilities, antitrust and trade regulation, environment and natural resources, consumer protection and product liability.

Among his recent significant transactions are:

Mr. Villadolid also serves as legal consultant of the Information Security Officers Group (ISOG), an organization which members consists of the Chief Information Security Officers of leading banks and financial institutions in the Philippines as well as other companies with heavy IT security requirements. In the field of cybercrime enforcement, Mr. Villadolid serves as consultant to the Philippine National Police Anti-Cybercrime Group and National Bureau of Investigation. He is also a member of the Forum for International Irregular Network Access (FIINA) and Philippine Dispute Resolution Center, Inc.Mr. Villadolid gives lectures and/or participates as panelist on cyber security and data privacy issues during forums and conferences held by the ISOG. He also participates as resource person before the Bankers Association of the Philippines (BAP) Task Force on Cyber Security. He has co-authored, among others, the Philippine Chapter on International Comparative Legal Guide to Cybersecurity 2018, 1st Edition and 2019, 2nd Edition published by the Global Legal Group and the Philippine Chapter on International Consumer Protection 2016 and 2017 published by the Center for International Legal Studies.

Mr. Villadolid was identified in The Legal 500 Asia Pacific 2021 Editorial as a recommended lawyer in the practice area of Dispute Resolution