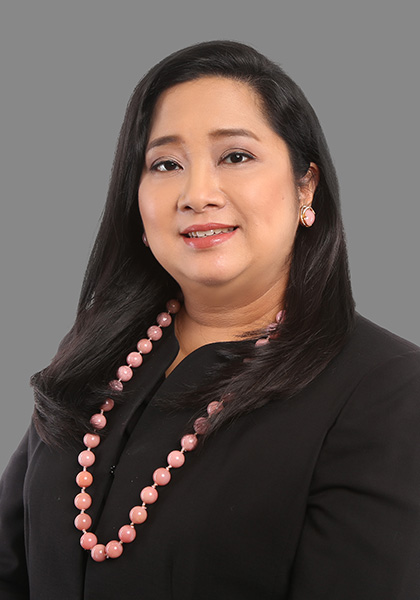 She has handled (and/or is handling) significant cases and transactions including the following where she:

Ms. Prodigalidad has authored a number of legal articles, including:

She also co-authored the Philippine chapters of:

Ms. Prodigalidad has likewise delivered various papers and/or spoke in various local seminars and international conferences on a vast array of topics on commercial litigation and ADR, such as:

Ms. Prodigalidad is an accredited Mandatory Continuing Legal Education lecturer and is a professorial lecturer in the University of the Philippines College of Law. In 2005, she taught Special Problems in Commercial Law and is currently teaching Civil Procedure.

Ms. Prodigalidad is currently a trustee of various institutions such as the UP Women Lawyers’ Circle, the Harvard Law School Alumni Association Inc. and the Philippine Institute of Construction Arbitrators and Mediators. She likewise held various positions in the Integrated Bar of the Philippines, where she served as Assistant National Secretary from 2011 to 2015 and National Secretary from 2015 to the present.

She is the Philippine delegate of FRAUDNET, a network under the auspices of the International Chamber of Commerce-Commercial Crime Services that specializes in globalized fraud litigation and asset recovery. She also served as a volunteer lawyer of the Child Justice League, a non-profit and nongovernmental organization committed to protecting the rights of, and obtaining justice for, all abused and neglected children.

In 2013, Ms. Prodigalidad passed the Fédération Internationale Des Ingénieurs-Conseils (FIDIC) Dispute Board Adjudicator Assessment Workshop sponsored by FIDIC and the Japanese International Cooperation Agency and is one of four (4) Philippine delegates accredited as a dispute board adjudicator.

From 2017 to 2019, Ms. Prodigalidad was awarded as “Commended External Counsel of the Year” by Asian-Mena Counsel. She has also been consistently recognized as one of the Leading Lawyers in the field of Dispute Resolution & Litigation by Asia Law Profiles, Chambers Asia-Pacific, Chambers & Partners and The Legal 500. She was cited as a “very bright and very active” commercial litigator, praised for her “imaginative and creative” arguments, further commended for her strategic approach that considers client’s business needs and described as “good in terms of strategy” and great in handling complex litigation involving cross-border issues. Since 2012 to the present, Ms. Prodigalidad has also been cited as among the key practitioners and experts in the field of Asset Recovery by Who’s Who Legal 100.

Ms. Prodigalidad was recognized by Asialaw Profiles as a Distinguished Practitioner in the practice area of dispute resolution in 2019.

She was regarded as a “Leading Lawyer,” and was recommended for the practice area of Dispute Resolution in the Asia Pacific Legal 500 for 2020.

In 2019, Ms. Prodigalidad was also one of the distinguished recipients of the “The Outstanding Women in the Nation’s Service (TOWNS)” award for her outstanding contributions to the field of law

Ms. Prodigalidad ranked first among the successful examinees of the 1996 Bar Examinations and was admitted to the Philippine Bar in 1997.