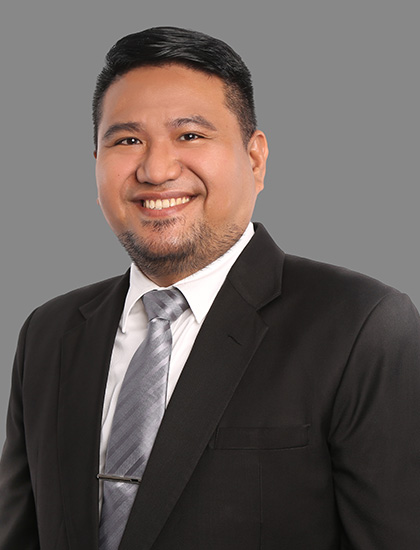 Mr. Soleng is the Monitor of the Firm’s Cebu branch. He specializes in civil, criminal and commercial litigation, and in labor and administrative laws. He acts as counsel for foreign and local corporations in mining, cement and construction industries. He also advises corporate clients in oil and power sectors, and those in banking, insurance, hotel and business process outsourcing industries. He has argued before trial courts and all appellate courts, and represented clients in various quasi-judicial and administrative agencies.

Mr. Soleng also serves as a consultant of the Cebu Chamber of Commerce on power and energy issues.

Among his significant cases are:

In 2017 and 2018, The Legal 500 Asia Pacific Editorial considered Mr. Soleng as one of the Leading Lawyers for Cebu and the Practice Area of Labor and Employment.

Mr. Soleng was a recommended lawyer for Law Firms in Cebu by The Legal 500 Asia Pacific for 2021.

He is currently a professor in the University of San Carlos, where he teaches courses on Remedial Law Review, Criminal Procedure, Obligations and Contracts, and Insurance.

Mr. Soleng graduated among the top five students of his graduating class and was admitted to the Philippine Bar in 2006. He is a member of the Cebu City Chapter of the Integrated Bar of the Philippines.