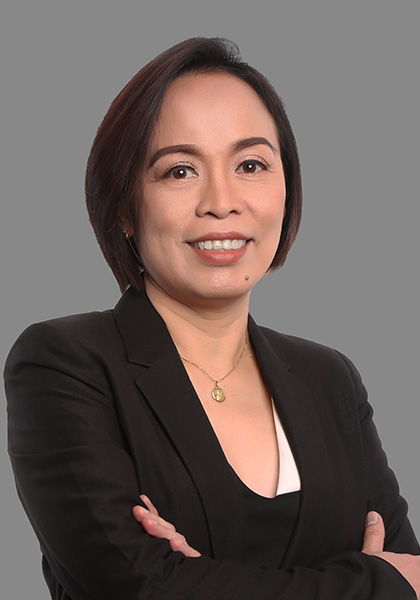 Ms. Abella specializes in corporate compliance, contracting and conveyancing, mergers and acquisitions, employment law, property law, litigation, and other corporate law/governance issues. She has argued before trial courts and all appellate courts, and represents clients in various quasi-judicial and administrative agencies.

Ms. Abella was a former lecturer in the Cebu Institute of Technology University, where she taught courses on contract law, corporation law, and partnership from 1991 to 1992.

She also serves as director and officer of various corporations.

Ms. Abella was recognized by Chambers Asia 2010 as a Leading Individual in the Cebu legal market in the area of real estate where she was described by clients as “pleasant and keen to reach a practical commercial conclusion”. In Chambers Global 2014, Ms. Abella was also cited in the field of Corporate/Mergers & Acquisitions, Real Estate where she was described as “active on corporate and commercial law”