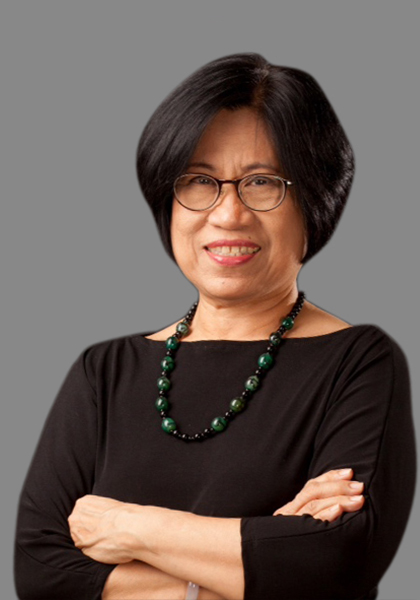 Ms. Herbosa’s areas of specialization include complex commercial and securities litigation, telecommunications, contract law, competition and anti-trust, public bidding and awards, recovery of ill-gotten wealth, sales and credit transactions and banking. She has argued before the Supreme Court and was directly involved in cases wherein significant rulings on the revival of judgment, exercise of discretion in the acceptance or refusal of bids, computation of the redemption period, obligations of an independent contractor, meaning of devaluation, the scope of the pre-trial stage in a criminal proceeding, the right to vote sequestered shares of stock, nature of a unilateral promise to sell, the liability of a joint tortfeasor and novation of contract, among others, were laid down. She has also participated in cases before the International Chamber of Commerce (ICC) arbitral tribunals and has collaborated with counsel of record in a case involving a major contract between the Philippine government and a foreign multinational before the International Centre for Settlement of Investment Disputes (ICSID).

Prior to re-joining the Firm in 2019, Ms. Herbosa served as the Chairperson of the Securities and Exchange Commission (SEC) from April 2011 to June 2018 where she implemented significant projects and reforms such as:

As SEC Chairperson, Ms. Herbosa was a member of the Anti-Money Laundering Council which investigates and prosecutes money laundering cases as an offshoot of predicate crimes such as corruption, bribery, plunder, swindling, fraud, misappropriation and malversation. She also acted as Chairperson of the Credit Information Corporation, the national aggregator of credit data in the Philippines established pursuant to the Credit Information System Act (CISA). During her term, she was involved in the establishment of its automated system for the collection of credit information from banks and other financial and lending institutions.

She also served as Chairperson of the Microfinance NGO Regulatory Council, an interagency body that accredits Microfinance Institutions (MFIs) according to financial, social and governance standards so that MFIs could avail of the preferential tax rate on its microfinance earnings. She was also the Co-chair of the Capital Market Development Council, composed of the public and private sectors responsible for the capital market blueprint, and actively participated in inter-agency collaborations such as the Financial Sector Forum, Financial Stability Coordinating Council, National Strategy for Financial Inclusion and the National Competitiveness Council. Ms. Herbosa also took part in relevant ASEAN initiatives toward the integration of capital markets in the ASEAN Capital Market Forum and became Chair of the Working Group D on Corporate Governance.

Ms. Herbosa has written a number of legal articles on banking, land titles, arbitration, land disputes, pre-trial, government procurement, and investment scams. Her article entitled “Balancing Ethics and Regulation” was included in “Ethics, Black White (or Gray)”, a book published by FINEX in 2018.

She was also given the Distinguished Alumni Award for Public Service by the University of the Philippines in 2014, and was awarded the Public Service Excellence Award by BizNewsAsia in 2016.

Ms. Herbosa ranked sixteenth among the successful examinees of the 1977 Bar Examinations.