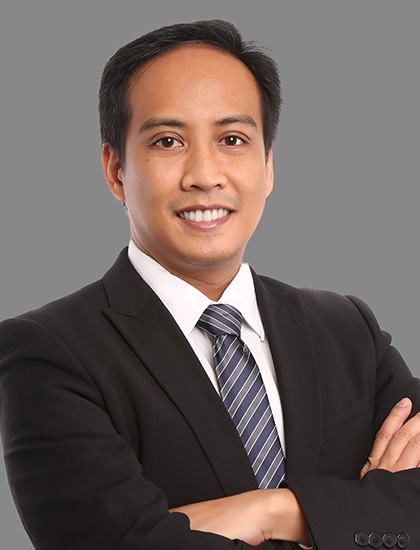 Bachelor of Science in Industrial Engineering
University of Santo Tomas, 2002

Mr. Genilo specializes in Intellectual Property Law. In patent law, he is involved in drafting of specifications and claims, prosecution of patent applications, enforcement in courts of patents, as well as providing freedom to operate opinions. In trademark law, he handles the prosecution of applications, search and seizure operations involving counterfeits, and court litigation against infringers. He also assists clients in depositing and enforcing copyrights, assisting clients in their online piracy concerns, conducting raids, and the licensing and franchising of various intellectual properties. Mr. Genilo also handles Labor and Employment cases for various clients.

Among his significant cases and work are:

Mr. Genilo was among the top passers of the 2007 Patent Agent Qualifying Examinations (“PAQE”). Thereafter, he was invited as a lecturer for PAQE examinees. He also completed the Advanced Course for Patent Experts in Tokyo, Japan organized by the Japan Patent Office.

Mr. Genilo regularly conducts lectures on claim drafting, response to Office Actions, freedom to operate, infringement, and cybercrime. He also served as a resource person of the Patent Law Training for Judges sponsored by the Philippine Judge’s Association in 2008. He is also a Lecturer in the FEU Institute of Law, where he teaches civil law and remedial law.